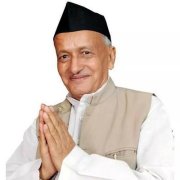 Born in Palanadhura Chetabgarh, Bageshwar District, Uttarakhand on 17th June 1942, Koshyari had his higher secondary education in Uttarakhand. He was elected as the General Secretary of the Student’s Union while studying at Almora College between 1961-62. Subsequently, he also represented the Executive Council of Kumaon University during 1979-82, 1982-85 and 1988-91.

Shri Bhagat Singh Koshyari had a passion for teaching and worked as a lecturer at the Raja Inter College, Raja Ka Rampur, Etah district, Uttar Pradesh for a few years.  He possesses a flair for journalism and writing.  He pursued this passion by becoming the Founder and Managing Editor of ‘Parvat Piyush’, a weekly published from Pithoragarh, Uttarakhand since 1975. He thus had a successful career as teacher, author and journalist.

‘Bhagatda’ as he is known affectionately, joined the Rashtriya Swayamsevak Sangh (RSS) at a younger age. He took part in the nationwide agitation against the Emergency and was imprisoned under the Maintenance of Internal Security Act (MISA) from 3 July 1975 to 23 March 1977 in Almora and Fatehgarh Central Jail.

Bhagat Singh Koshyari was appointed as the Chief Minister of Uttarakhand from 2001-02. However, he had to put in his resignation due to the party’s defeat in the Assembly elections.

Shri Bhagat Singh Koshyari served as the National Vice President and President of the State BJP of Uttarakhand.  For five years from 2002 to 2007, he served as the Leader of the Opposition in the Uttarakhand Legislative Assembly.

His political career went from strength to strength as he seized the opportunities that came his way.

He was elected to the Rajya Sabha from Uttarakhand in November 2008 and held the position till 2014.

As Chairman of the ‘Committee on Petitions’ of the Rajya Sabha, he gave a report on ‘One Rank One Pension’; ‘Railway Network in Himalayan States’; besides several other important social issues.

An RSS veteran, Koshyari served as National Vice President of BJP as well as the BJP Chief in Uttarakhand.

In 2014, he was elected as the Member to the 16th Lok Sabha from the Nainital – Udhamsingh Nagar constituency. As Chairman, of the ‘Committee on Petitions’ Lok Sabha he continued to examine various socially important issues in depth and submitted crucial reports to the Lok Sabha.

Demonstrating his commitment to give back to the community, he founded various schools in Uttarakhand: Saraswati Shishu Mandir, Pithoragarh; Vivekanand Vidya Mandir Inter College, Pithoragarh; and Saraswati Vihar Higher Secondary School, Nainital, to name a few.

During his tenure as Energy Minister in Uttarakhand, he made sincere efforts for the rehabilitation of persons displaced by the Tehri Dam.

Shri Bhagat Singh Koshyari has tremendous grassroots presence and is known in the entire State of Uttarakhand as a people’s leader.